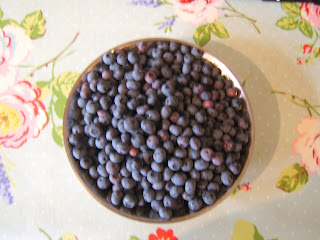 Having just arrived back from a week away in sunny spain, I headed into the garden to pick some blueberries ready for my Great Nephew's arrival on sunday. He is a blueberry fiend and when he came to visit last year he quicky worked out what was on my bushes in the garden were the same thing as he gets out of a box from the supermarket.  He couldn't be kept away from my blueberry bushes!  But....even he would not get through the mountain of blueberries now ready for picking, so it was time to dust off my blueberry recipes and get baking!

Blueberry Jam
I always thought jam looked really difficult to make with jam themometers, muslin squares and jam sugar. So after a chat with my Dad (who always makes the jam at home) he gave me a quick jam recipe that he makes with his blackberries. I just swopped the fruit to blueberries!
I make this jam with our homegrown blueberries when they are in season and then keep it in the fridge to give me a bluberry hit in the depths of winter!

Put the blueberries in a pan with the water. Bring to the boil, then simmer for about 10 minutes, stirring every few minutes, until the berries burst and release their juice. Make sure you stop and inhale the gorgeous scent of the bubbling berries.

Add the sugar, stir until dissolved, then boil for 10 minutes.

Pour into 1 large and 1 small sterilised jars, leave to cool, then cover and chill. 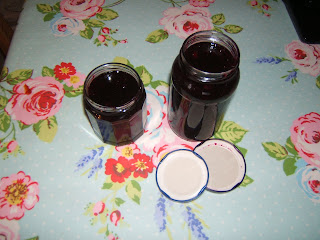 
Sift the dry ingredients twice, place the flour, baking powder, salt and cinnamon in a
sieve and sift them into a bowl and repeat!

In another mixing bowl, whisk the eggs, sugar and milk together.
Pour the melted butter into the egg mixture, whisking once again.

Now sift the flour mixture in on top of the egg mixture and fold it in, using as few folds as possible (ignore the lumpy appearance at this stage and don't be tempted to over-mix). Fold in the blueberries and spoon into the tin.

To make the  crumble topping I always put all the ingredients into my food processor with the metal blade and pulse until a 'bread crumb' mixture is achieved (if you havent got a food processor you can rub the flour and butter together until you get the breadcrumb mix then stir in demerera sugar and cinnamon).  Next sprinkle in 1 tablespoon of cold water, then press the mixture loosely together.

Now sprinkle this mixture all over the cake. Bake on the centre shelf of the oven for 1 hour 15minutes or until the cake feels springy in the centre. I have a fan oven and it was done after 1hr and 5 mins. 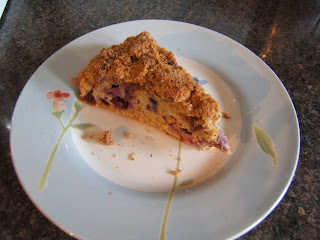 After all this baking I now need to think about dinner. I think it will be Nigel Slater's sausage and mustard pasta for us. Nigel is a bit of a god as far as I am concerned. His "Real Food" book is so well used, some of the pages are a bit "scratch and sniff"﻿ now. (I am not the tidiest of cooks!)
Posted by Mrs Vander-Cave at 18:44