Cake for the workers 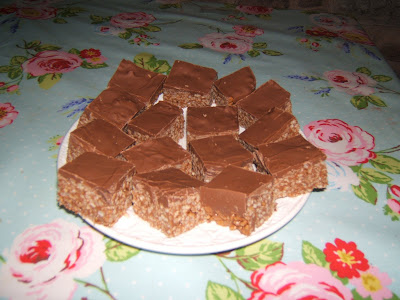 My husband arrived home from work a couple of days ago with a request; Can you make some cake for the sales team meeting? Apparently they have a bit of a passion for my Mars bar crispie cake or Christine's cake as I like to think of it.
Christine was a very dear freind of mine who gave me this recipe many years ago when we were both working as nannies together. The children all loved this recipe and as it was so easy to make they could get involved and help make the cake.
Christine was an amazing woman who lost a long battle against cancer 18 months ago. She was an inspiration to everyone who met her and fought every day to stay with her two daughters for as long as she could.
In the last year of her life she set up a charitable foundation raising money for Macmillian nurses and local cancer charities - http://www.cwc-foundation.co.uk/ . The  foundation team have continued fundraising and hold events throughout the year to raise much needed funds for charities that did so much for Christine and her family and many other families throughout the UK.

So here in print is my tribute to Christine Wilde a missed and very dear friend.

Chop the mars bars up into small pieces. Melt them together with the golden syrup and the butter in a bowl set over a pan of barely simmering water. Leave until completely melted then stir until a smooth consistency is achieved.
Place the rice crispies in a large mixing bowl,  pour the mars bar mixture into the rice crispies. Stir until well mixed.

Transfer the mixture to the tin. Even the mixture out and then place in the fridge until set.

Melt the chocolate in bowl set over a pan of barely simmering water. Be warned 'eating' chocolate is a little bit more temperamental than 'cooking' chocolate so be careful!  Once melted, pour the melted chocolate over the rice crispie mixture. Chill again until set.

Once set cut into squares with a sharp knife.