Baking bonanza in the back of beyond!

Last weekend my dear friend Gem and her family came to stay in the back of beyond. They are city folk and so really enjoyed the change of scenery. We were lucky with the weather and had a lovely weekend going for long walks in the beautiful Autumnal countryside.

Before their arrival I took the afternoon off work to bake for our guests. As you may remember, Gem is coeliac and has a lactose intolerance, so I have to get creative to produce tasty gluten and lacto free fare for her. To be fair I enjoy the challenge and this time I decided to raise my gluten free game and make the gluten free cooks nemesis - pastry. Pastry needs gluten to make it malleable and to give it a nice crisp texture when it is cooked, so without gluten it can be crumbly and tough.

I decided to follow the recipe on the back of the Doves Farm gluten free flour mix. My theory being it must work if the producers of the flour mix say it does!! Before I started I did a little Google search looking for the best gluten free pastry recipes. Initially I found lots of gluten free quiche recipes, which were gluten free because they omitted the pastry altogether! This confirmed my thought that only the brave of heart actually home make gluten free pastry. Eventually, after much trawling, I unearthed  some good tips for making gluten free pastry which I incorporated into the Doves recipe.  I also used my trusty Kenwood food processor because all pastry comes out better the less it is handled. Amazingly it was easy to make and came out well for a first attempt. I decided to use the pastry for individual quiches and chocolate pecan pies. I figured I needed to get the most out of this first attempt at gluten free pastry.

Working the pastry into deeply fluted individual tartlet tins was very fiddly and the end result was a little messy because I was nervous about how much the pastry might shrink (and I had left the pastry thicker than I would have done for normal pastry because of it fragility). After baking it blind I was nervous about trimming the cases too much in case of cracking. With hindsight I had little to fear. The pastry turned out to be crisp but not too heavy or tough. It had a slight biscuity quality and lent itself better to the sweet filling than the savory. Gem suggested a little salt might be added to counteract this when using this pastry for a savory filling.

Once I had made the quiches in normal and gluten free varieties, I mentioned to my husband that I would be making chocolate pecan pies as well. He then informed me that he doesn't like pecans! So in the spirit of catering for all I ended up making him a pecan-less chocolate pecan pie. This is the pie in the picture because all the other pies got eaten before I got chance to photograph them.

Place the flour, butter and Trex in the food processor. Process until a bread crumb mix is achieved (usually within 30 seconds of turning food processor on).
Add the egg yolk and water and process until a ball of pastry is formed.
Turn out the pastry and quicky form into a ball. Wrap in cling film and chill in the fridge for 30minutes.
Once chilled, place the pastry between two large sheets of cling film and roll out to desired size and shape. (Rolling it out between sheets of cling film means no extra flour is introduced into the pastry which can make the mixture dry and tough)
Use this pastry as directed in your recipe.

First make the pastry. Put the flour, caster sugar, butter and trex into the food processor, process until bread crumb texture is achieved.
Add in the water and process until a ball of pastry is formed. Turn out and wrap in cling film and chill for 30 mins.
After chilling roll out the pastry on a floured board to the size of your tin (or tins).  Grease your tin(s) with a little melted butter then line with your pastry. Sprinkle the pecans into the bottom of the pastry case. Place tin onto a baking sheet and leave to one side whilst you make the filling.

In a small saucepan mix together the golden syrup, the brown sugar, chocolate and butter. Heat this mixture gently until it is melted and smooth. Remove from the heat and beat in the eggs and vanilla. Pour the mixture into the pastry case.

Bake in the oven for 50 minutes or until completely set. If making small individual tarts bake for 30 minutes. Remove from the oven and cool before serving. The tart may sink a little in the middle but this is normal. 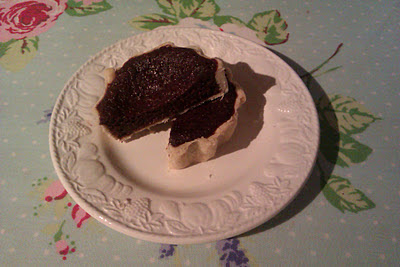