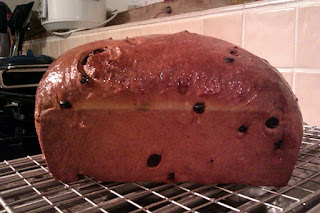 This weekend we have been home on the farm, mainly because it has been too cold to go out and the young Master Vander-cave has been busy helping the farmer look after the tiddlers. Now for those of you not schooled in farm speak, tiddlers are the lambs that are orphaned and there are no spare ewes to adopt them or they are the smallest lambs who would not grow well if left with their mothers.
I was informed yesterday by my son that these tiddlers had to be fed three times a day on milk and sheep cake so they  grow fat because the fatter they are the better price the farmer will get at market for them.

My son and the Farmers youngest child would happily spend all day helping out on the farm. Watching the two friends confidently carrying a new born lamb each whilst the mother trots along behind as if this is the most normal thing in the world to be doing on a Sunday morning is quite amazing!  My son's attitude to the whole process of birth, life and death maybe forever skewed by his time on the farm. Only last week he was complaining about a ewe taking a whole half an hour to give birth and the farmer having to pull the lamb out. I pity whichever girl my son ends up having babies with because I fear they will get little sympathy on the labour ward!

So whilst Master Vander-Cave was busy outside and I didn't have too much to do I decided to have another go at fruit bread. I love it toasted and although you can buy fruit bread in the supermarket I am usually left feeling like I would like a little more fruit in the bread and a touch more warm spice. Over the years I have made various attempts at making fruit bread in my bread maker, but it never seems to rise well and often ends up very dense and inedible. So today I thought I would have a go at making it from scratch. The key here is time. One cannot make bread in a rush because bread needs lots of kneading time followed by lots of rising time.  Without time for both of these activities the bread will be flat and inedible. After trawling through my recipe books for a suitably fruity enough bread I found in my trusty Complete Cookery Course a recipe for  Bara Brith, which is a Welsh fruited bread. As we live not too far from Wales I figured I would give it a whirl.

Now at this point I have to admit that I did cheat a little and use my kenwood chef with its dough hook to make the dough and do the heaviest of the kneading. I then removed the bowl from the mixer and allowed the dough to rise in the bowl covered with clingfilm. I was really pleased with this loaf it has a lovely texture, a fruity flavour and a nice sticky crust. And it toasts like a dream.

First warm the milk in a jug in the microwave until it is hand hot . Whisk in the teaspoon of sugar, followed by the yeast, then leave it in a warm place to froth for about 15 minutes.

Now sift the flour and salt into a large mixing bowl, stirring in the remaining 2 oz (50 g) sugar as well. Then rub the fat into the dry ingredients until the mixture looks like fine breadcrumbs.
Stir in the mixed spice next, then pour in the beaten egg and frothed yeast, and mix to a dough.

Now turn the dough on to a floured surface and knead until smooth and elastic (about 10 minutes), or if using a mixer with dough hook allow the mixer to knead the dough for around 5 minutes.


Replace the dough in the bowl and cover with a damp cloth or some clingfilm. Leave in a warm place to rise until it has doubled in size – about 1½ hours.

After that, turn the dough out and knock it down to get the air out, then gradually knead the fruit in and pat out to a rectangular shape. Roll it up from one short side to the other and put it in the loaf tin (seam-side down).

Place the tin inside an oiled plastic bag and leave it to rise, until the dough has rounded nicely above the edge of the tin (about 30-45 minutes). Meanwhile, pre-heat the oven to gas mark 5, 375°F (190°C).
When the dough has risen and springs back when pressed lightly with a floured finger, remove it from the bag and transfer the loaf to the oven.  Bake on the shelf below centre for 30 minutes. (I found in my fan oven that the loaf was brown enough in 22 mins)  Then cover the top of the loaf tin with foil to prevent it over-browning, and continue to bake for a further 30 minutes. (My loaf took 50 minutes in total)
Turn the loaf out, holding it in a tea-cloth in one hand and tapping the base with the other. It should sound hollow – if not, pop it back upside down (without the tin) for 5 minutes more. Cool the loaf on a wire rack, and brush the top with clear honey to make it nice and sticky, before the loaf cools. 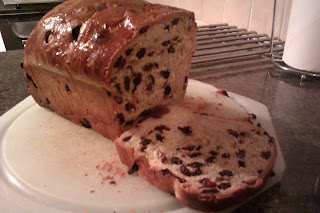 
Today is cold, wet and miserable here in the back of beyond. The sky has been grey and the air full of drizzle, definitely a stay inside and snuggle day. But as it is a week day this can't happen, so I decided the young Vander-Cave and I needed  something comforting when he came home from school today. I found in the fridge some leftover butter milk that I bought to make the Hummingbird bakery red velvet cupcakes. With the messages of " Love food hate waste" and "the average household wastes £680 a year on food that is thrown away" I decided to make scones. Cheap cheerful and divine when eaten fresh from the oven.

In the past my scones have been a bit hit and miss so with the aid of Google I set out to find fail safe recipes for scones. OMG scones are a hot topic on the Internet. so many different recipes and tips. After much trawling and reading I decided to use the BBC good food recipe but aided by tips from other websites

Put the flour, salt and butter into a food processor and pulse until you can't feel any lumps of butter (or rub in butter with fingers). Pulse in the sugar.

Gently warm the buttermilk (don't throw away the pot) and vanilla in a microwave or pan. Using your largest bowl, quickly tip in some of the flour mix, followed by some of the buttermilk mix, repeating until everything is in the bowl. Use a knife to quickly mix together to form a dough - don't over-mix it.

Tip onto a floured surface and lightly bring together with your hands a couple of times. Press out gently (do not roll out)  to about 4cm thick and stamp out rounds with a 6cm or 7cm cutter lightly dusted with flour. When cutting the scones out do not twist the cutter just cut straight downwards.  Re-shape trimmings, until all the dough is used. Spread out on a lightly floured baking sheet or two. Add a splash of milk into the buttermilk pot, then use to glaze the top of each scone.   Bake for 10-12 mins until golden and well risen.

These scones came out beautifully although next time I think I will brush the top with beaten egg for a nicer finish. 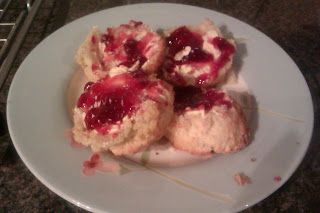 Posted by Mrs Vander-Cave at 14:27 No comments: 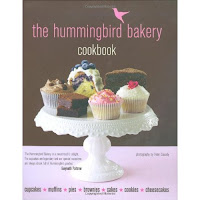 Life in the back of beyond has been quiet since boxing day, all thanks to the flu virus that has knocked Mr VanderCave and I literally off our feet. All baking has been suspended whilst we have been busy getting through copious amounts of cold and flu remedies, throat lozengers and tissues. Finally, today I think I saw a light at the end of the tunnel when my mind started wandering towards the lovely cookery books I got for Christmas.

I was lucky enough to get two Hummingbird Bakery recipe books, which are both packed full of recipes that I just can't wait to try out! I was quite surprised when reading some of the recipes about the small amounts of butter used for the cupcakes. Call me old fashioned but I am a devotee of the old 4,4,4,2 (equal amounts fat,sugar, flour, half the amount of eggs)  approach to sponge cakes. I decided to put my skepticism to one side and have a go at the Chocolate and hazelnut cupcake recipe. Any thing with Nutella in is ok by me!

2. Put the flour, cocoa powder, sugar, baking powder, salt and butter in a bowl and mix together. I used my Kenwood chef with the K beater but an electric hand held whisk will work just as well.  It should be a slightly sandy/grainy texture

3. Pour the milk into the mixture and mix. Then add the egg and beat until it's all incorporated.

4. Spoon the mixture into cupcakes cases in a muffin tin, filling to about halfway or 2/3 full. They rise quite a bit. Bake for 15-20 minutes until springy to touch.

5. Leave to cool completely, then cut out a little circle in the cupcake. Pop the loose piece of cake out, insert a dollop of nutella, then put the cake piece back ontop so you have a filled cupcake.

Mix all the above ingredients together until incorporated and continue mixing for about 5 minutes. The more mixing, the fluffier the icing! Use a palette knife to ice the cupcakes, then add the whole hazelnut as a finishing touch. 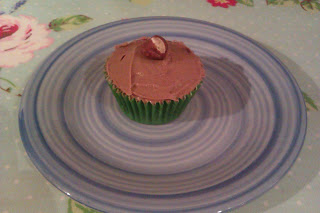 I have to say I was pleasantly surprised by the outcome.The sponge was moist, light and airy, and the frosting was creamy and smooth. The addition of the nutella in the middle makes these cakes a Nutella lovers idea of heaven. This recipe is a definitely a keeper and I looking forward to trying out other recipes from the books soon! 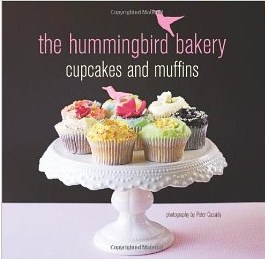