So spring has sprung, the main lambing season  is in full swing and the cacophony of tractors, Sheep in labour and bleating lambs fills the air. The countryside is anything but peaceful on a sheep farm during lambing. The beautiful daytime weather and chilled nights we have recently enjoyed are causing problems for some of the labouring sheep and their newly delivered woolly offspring. The animals cannot adjust their inner temperature gauges and they develop pneumonia. The  poor sleep deprived farmer has been running around vaccinating sheep at every turn. He explained all this when us townies went to coo over the new babies. (I try hard not to think about where they will end up in only a few months time!)

As spring has marched along it has brought with it an eagerly awaited event: Young Master Vander-Cave's Birthday. Unfortunately for him it was a school day which somewhat dampens the celebrations as far as he is concerned. To help make the school day festive  his school allow children to bring in cake or sweets for the whole class. Of course we can't send in sweets it just has to be cake. Master Vander-Cave had already requested Chocolate fudge cake as his birthday cake and "cakes with chocolate sprinkles for the class cake"  To try and keep the workload to a minimum I decided cupcakes were probably the best option. What I didn't realise was that 34 cupcakes were required! Clearly the Kenwood would have to take the strain, again!

My new favourite The Hummingbird Bakery cookbook had just the recipe I needed. Vanilla Cupcakes with Vanilla frosting which I could then decorate with the requested chocolate sprinkles.

Preheat the oven to 170°C (325°F) Gas 3.
Put the flour, sugar, baking powder, salt and butter in a freestanding electric mixer with a paddle attachment (or use a handheld electric whisk) and beat on slow speed until you get a sandy consistency and everything is combined.
Gradually pour in half the milk and beat until the milk is just incorporated.

Whisk the egg, vanilla extract and remaining milk together in a separate bowl for a few seconds, then pour into the flour mixture and continue beating until just incorporated (scrape any unmixed ingredients from the side of the bowl with a rubber spatula).

Continue mixing for a couple more minutes until the mixture is smooth. Do not overmix.

Spoon the mixture into the paper cases until two-thirds full and bake in the preheated oven for 20–25 minutes, or until light golden and the sponge bounces back when touched.
A skewer inserted in the centre should come out clean. Leave the cupcakes to cool slightly in the tray before turning out onto a wire cooling rack to cool completely.

To make the frosting:
Beat the icing sugar and butter together in a freestanding electric mixer with a paddle attachment (or use a handheld electric whisk) on medium-slow speed until the mixture comes together and is well mixed.

Turn the mixer down to slow speed. Combine the milk and vanilla extract in a separate bowl, then add to the butter mixture a couple of tablespoons at a time. Once all the milk has been incorporated, turn the mixer up to high speed.

Spoon or pipe the frosting onto the cold cupcakes. 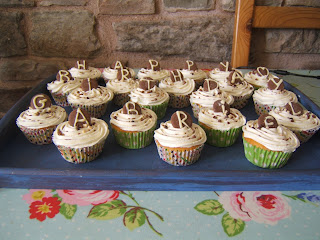