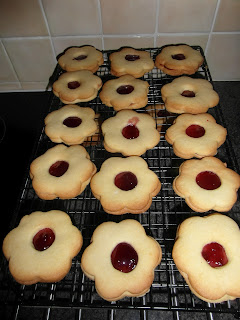 As I alluded to in my previous post, I am currently struggling to keep up with the demand for home baked goodies for Master Vander-Cave. For the past couple of weeks he has been enrolled in a cricket coaching clinic which he has thoroughly enjoyed but comes home absolutely exhausted and ravenous. He is requesting snack upon snack until dinner is ready which he also wolfs down at lightening speed, which is a pleasant change from his early years when eating was an exceedingly time consuming exercise which frustrated all who had to bear witness to it! 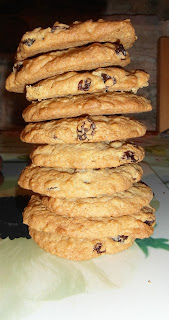 Some how my baking has veered away from cupcakes, towards cookies and biscuits instead, probably because they are quicker to produce than cakes. They are almost more yummy whilst still warm, meaning Master V-C doesn't have to wait as long for another home baked hit! Although the double chocolate cookie recipe has had several outings recently as steadfast favourite with both the boys in my home, I have branched out a bit and road tested a jammy dodger recipe from The River Cottage Handbook using my cookie cutters bought in the Hyper Asia shop in Spain. (everything you could need for just a few euro's, just don't look for longevity!) My other new recipe trial was The Hummingbird Bakery's version of raisin and oatmeal cookies, an  American classic and one of my favourites.
Both recipes  turned out well although the jammy dodger dough needed quick handling with constantly floured hands and surfaces! Also note when cutting out the shapes for jammy dodgers make sure you bake the tops and bottoms on the same tray otherwise you may not be able to sandwich them together and put them back in the oven if the tops or bottoms are still in the oven (something I almost did!)

Sift the flour, salt and icing sugar into a large mixing bowl. Add the butter and lightly rub into the flour mix, using your fingertips, until the mixture resembles fine breadcrumbs.

In a small bowl, whisk the egg yolk and vanilla extract together. Make a well in the centre of the flour mix. Add the egg and vanilla mix and work together to form a soft, smooth dough. Alternatively, you can  do what I did and place everything in a food processor and bring to this stage.

Seal the dough in a polythene bag and chill in the fridge for 25–30 minutes.

Preheat the oven to 170C / gas mark 3.
Divide the dough into two equal portions. Place one portion between two pieces of lightly floured greaseproof paper and, using a rolling pin, roll the dough to approximately 4mm thickness.
Repeat with the second piece of dough. Remove the top paper. Note: I would be a little more heavy handed with the flour as the mixture is very likely to stick!

With the larger biscuit cutter, cut the dough into discs (make sure you have an even number). Using the smaller cutter, cut out and remove the centre of half the biscuit discs; the cut-out pieces can either be kneaded back into the remaining dough or baked just as they are.

Place all the discs on the baking sheets. Bake for 15 minutes until just firm and barely coloured.

Remove from the oven and place a teaspoonful of jam in the centre of each whole biscuit round. Spread to 1.5cm from the edge. Place the cut-out rounds on top. Return to the oven and cook for a further 5–6 minutes by which time the biscuits will be evenly cooked and the jam sufficiently hot to stick the biscuits together.

Leave the biscuits to cool for 5 minutes before transferring to a wire cooling rack.

Put the butter and sugars in a freestanding electric mixer with a paddle attachment and cream until light and fluffy. Add the eggs one at a time, mixing well and scraping any unmixed ingredients from the side of the bowl with a rubber spatula after each addition. Turn the mixer down to slow speed and beat in the vanilla extract.

Sift together the flour, salt, bicarbonate of soda and cinnamon in a separate bowl, add the oats and mix well. Add to the butter mixture and beat until well mixed. Stir in the raisins with a wooden spoon until evenly dispersed.

Arrange equal amounts of cookie dough on the prepared baking trays. Make sure that the cookies are spaced apart to allow for spreading while cooking. Bake in the preheated oven for 12 minutes, or until golden brown and firm. Check them regularly to make sure they are not burning. When you are happy tat they are cooked through, remove from the oven and leave to cool slightly on the trays before turning out onto a wire cooling rack to cool completely.

Bringing a bit of sunshine to the back of beyond 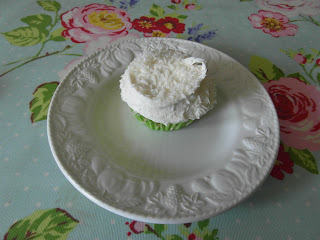 Sunshine seems to be a rare commodity here in the back of beyond. It is August and still we have no consistent weather. This has hit us harder after our beautifully sunny holiday and I am feeling a bit of PHB (post holiday blues!). To try and counteract this I found a lovely sunny sounding recipe to try out on my gloriously sunny natured girlfriends when an opportunity for a lightening visit to the big city arose. Pineapple and coconut cupcakes from the perennially fairweather peeps at the Hummingbird Bakery. I converted their recipe to gluten free as gorgeous Gem would be one of my taste testers along with  my darling Sophie and her fabulous mummy. The cup cakes were welcomed by all the grown ups and deemed a delicious delight, with Sophie's mum taking the one remaining cake home for later and Gem pronouncing that I could make these again for her! (The children were slightly less impressed, I think the flavours are slightly more adult orientated.)
I have been asked to get this recipe up on the blog because Sophie's mum needs this recipe in her life ASAP! So for you Barbara here it is:

Pineapple and Coconut Cupcakes from the Hummingbird Bakery gluten free version
To Make a regular version exchange gluten free flour for standard flour, only use 1.5 teaspoons of baking powder and omit the Xantham gum.

Put flour, sugar, baking powder, salt and butter in a freestanding electric mixer with paddle attachment (or use a handheld electric whisk) and beat on slow speed until you get a sandy consistency and everything is combined.

Mix coconut milk and vanilla extract in a separate bowl, the beat into the flour mixture on medium speed until well combined. Add egg and beat well.

Divide chopped pineapple between paper cases. Spoon cupcake mixture on top until two-thirds full and bake in preheated oven for 20-25 mins, or until light golden and sponge bounces back when touched. Leave to cool slightly in tray before turning out onto a wire rack to cool completely.

FROSTING
Beat the icing sugar and butter together on medium/slow speed. Turn mixer down to slower speed and pour in coconut milk. Once all milk has been incorporated, turn mixer up to higher speed and continue beating until frosting is very white, light and fluffy (5-10mins).

When cupcakes are cold, spoon frosting on top and finish with a sprinkling of desiccated coconut.

P.s I have also made jammy dodgers and double chocolate praline muffins this week. Blog posts to follow soon (Master Vander-Cave on his school hols is eating treats as quickly as I can bake them!)

A welcome return to the Back of beyond. 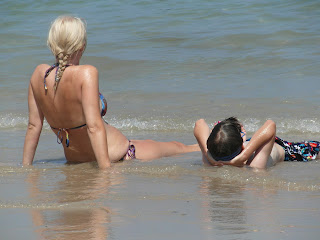 We have just returned from our annual pilgrimage in search of those most elusive of things, sunshine and relaxation! Thankfully we found most of both in Spain. We are lucky enough to have a family member with a house in the Costa Blanca region. The area is somewhat Anglicized with golf courses, all you can eat English breakfasts and sports bars showing the Olympics.  For our needs of relaxation, water based fun for Master Vander-Cave and some sunshine for all of us, it is perfect! Very close to our holiday home is Villa Martin Plaza, which is home to every cuisine imaginable, with restaurants to cater for all palates and budgets. We ate out at various establishments which were all enjoyable but none lived up to Indigo Indian restaurant near La Zenia beach. The proprietors speak many languages between them and always have a friendly welcome for everyone. This year they persuaded Master Vander-Cave to try some chicken tikka cooked in the tandoor and served on a bed of sizzling vegetables. Initially reluctant to try it, after a little cajoling from us, he took a bite, declared it was delicious and decided that what was what he would have for his main course! I urge anyone staying in the la Zenia/ Villa Martin area to make a trip to Indigo for wonderful hospitality, reasonable prices, a great house white and really scrummy food!

On our return we were welcomed home with the first batch of Back of Beyond blueberries. These are at least 3 three weeks late in cropping and I was starting to think all the little green berries were never to change to the inky blueness that I so love. I had only just shaken all the sand out of my flipflops when I started gathering blueberries ready for a batch of blueberry muffins. I was shocked to find that I had not already blogged my favourite blueberry muffin recipe so here it is. Enjoy! 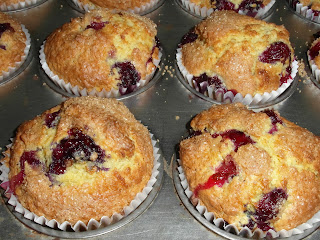 In a large bowl stir together the flour, caster sugar, baking powder, bicarbonate soda and salt.

In a separate jug stir together buttermilk,butter,egg and vanilla until well blended.

Make a well in the centre of the dry ingredients; add the sour cream mixture and stir to just combine. Stir in the blueberries

Spoon the mixture into the prepared muffin cups and sprinkle with the demerara sugar evenly over all muffins.

Bake in the pre heated oven for 20 minutes. They should be well risen and golden and a cake tester inserted into the middle of one muffin should come out clean.

Turn out onto a cooling rack for at least 15 minutes before eating (scalding hot blueberries can be painful!)

Posted by Mrs Vander-Cave at 18:22 No comments: