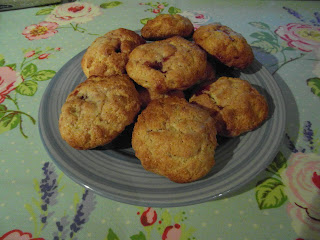 Last week, during a conversation with my mum, she mentioned how much she missed raspberry buns, which she used to make all the time when I was young. I have to admit I had completely forgotten about this particular delicacy from my childhood until mum mentioned them. She said quite wistfully she never got them any more because Dad didn't bake that sort of thing, and of course with mum's disability she cant bake any more. She wasn't sure of the recipe but 'thought she had it written down somewhere', but didn't know where! Trusty Google to the rescue and within 2 minutes I had a recipe from a fellow bloggers page  http://farmersgirl.blogspot.co.uk which she had got from a 1970's magazine clipping. I called mum back and she confirmed that this sounded right. I promised to make the buns and send them with Mr Vander-Cave when he was next down in the south. Mum said that they are best eaten fresh from the oven and admitted that she could happily polish off half a batch instantly when she used to make the buns!

I have to say I found containing the jam within the bun a bit tricky and ended up flattening the dough out then pulling the edges up and over the jam which worked better. Mum was right as they were particularly scrummy when fresh from the oven, so I hope she enjoys the remainder when they get delivered to her today!

Brush the baking trays with a little oil of melted fat. Heat the oven to gas mark 6 or 400 degrees (that would be Fahrenheit, so 200C), to be ready for the buns.

Sift the flour and salt into a large mixing bowl. Add margarine and cut it into small pieces with a knife. Lift up the flour and margarine in your fingers and rub it as it falls back into the bowl; lifting it above the bowl keeps the mixture cool (I used my Kenwood with the k beater). When the mixture is of an even texture and all the little pieces of margarine have disappeared, stir in the caster sugar.

Beat the egg in a small bowl. Add it to the mixture with just enough milk to make a stiff dough; this may only be a tablespoonful and it depends on the size of the egg.

Divide the mixture into 10 even sized pieces and , with your hands lightly floured, roll each one into a little ball. Put the buns on to a greased baking tray with rough space between to allow them to spread. With your fingers, form a hollow in the centre of each bun to hold the jam.

Put a small spoonful of jam into the hollowed centre of each bun. Pinch the mixture together over the jam, so that the jam is hidden. Brush the tops of the buns with a little milk and sprinkle them with caster sugar.

Cook the buns just above the centre of the fairly hot oven for about 15 minutes, until they are risen and nicely browned. The jam should burst through the surface. Using a palette knife, slip the buns on to a wire tray to cool.

Update; Mum reports that they were "Very Nice" which to anyone who knows my mum will attest that is high praise!
Posted by Mrs Vander-Cave at 11:39 1 comment:

A change is as good as a rest. 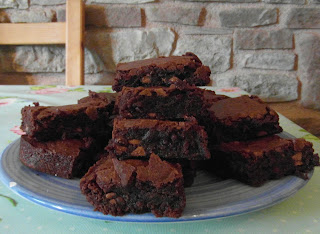 Picture the scene. The cake tin is empty, the skies are grey and the cake fiend (aka the young master Vander-Cave) is due home soon and my energy levels are low. I definitely need something to lift my spirits and give me the energy boost to get through the rest of the day. Looking in the baking ingredients cupboard I decided on brownies and turned to my favourite brownie recipe by Nigel Slater from his kitchen diary. As a regular brownie baker I have tried many recipes over years before finally settling on the Nigel Slater recipe as my favourite brownie. Rich dense chocolate brownie with hunks of 70% dark chocolate, it is a chocolate lovers dream. Sadly, on this particular day, I only had 200gms of chocolate which was not enough for Nigel's recipe. I didn't have the energy to go to the shop for more (remember we live 15mins from the nearest supermarket). Not to be thwarted I pulled out my now well thumbed Hummingbird bakery cookbook to discover their brownie recipe only needed 200gms of dark chocolate. Result! Particularly as the recipe is a mix it all together type recipe which fitted perfectly with my low energy levels. I was very pleased with this low effort version of brownies and although not quite as deep as Nigel's offering, it was a very good alternative with a nice crust on top and a slightly gooey, soft, 'fudgy' centre. One I am sure I will  use again. I think  this recipe would convert well to a gluten free version, although Gem will say she already has the perfect gluten free brownie recipe (which I promise I will wrestle from her sometime soon and blog for all the gluten free peeps who read this!)

Preheat the oven to 170°C/325°F/gas mark 3.
Put the chocolate and butter in a heatproof bowl over a saucepan of simmering water (do not let the base of the bowl touch the water). Leave until melted and smooth.

Remove from the heat. Add the sugar and stir until well incorporated.

Add the flour and stir until well incorporated. Finally, stir in the eggs and mix until thick and smooth.

Spoon the mixture into the prepared baking tray and bake in the preheated oven for about 30 to 35 minutes, or until flaky on the top but still soft in the centre. Be careful not to overcook otherwise the edges will become hard and crunchy.

Leave to cool completely before dusting with icing sugar.

Posted by Mrs Vander-Cave at 11:27 No comments: