Christmas creativity in the Back Of Beyond.

This week has been all about the Christmas cakes. I have iced four in the past week which has given me plenty of practice with fondant and royal icing. The most creative design was the gluten free Christmas cake which I iced first to reduce the risk of cross contamination. I liked the idea of making a Christmas present cake as this would indeed be a Christmas gift. After the rigmarole I had had with my previous bow attempts for my sisters cake I found a different Youtube clip showing an easier way to make a fondant bow. Ha ha ha! They might look easy in the video clips but do not be fooled. Anyone who says you can work with fondant shapes a few hours after making is fibbing. It needs to be left over night to totally harden otherwise it is just too fragile. So after 2 attempts at the bow for that Christmas cake I decided to revert to an easier design for the other three!

As well as the full sized Christmas cake I also produced some Santa and snowmen cupcakes from a design in the latest free Sainsburys Christmas magazine. Again I would question their instructions which states all you need is some fondant icing in a selection of colours and a round and serrated edge cutter. In reality I used at least 2 of my fondant tools for making Santa's beard. Although having looked at the BakingMad.com site which the recipe initially originated from their Santa has simpler styling.
For anyone who wishes to attempt these the instructions can be found at: http://www.bakingmad.com/recipes/cupcake-recipe/christmas-cupcakes
I used my own Vanilla cupcake recipe which you will find below!

Preheat the oven to 190c. Line a cupcake pan with paper cases.

Beat the butter and sugar together until pale and fluffy (at least 5 minutes).

Add the eggs, flour, vanilla and milk and beat until smooth and a soft dropping consistency. If the mixture is a bit stiff add an extra drop of milk.

Divide the mixture between the cupcake cases and place in the oven. Cook for 15 minutes or until a skewer inserted in the centre comes out clean.

Decorate in any way you please! 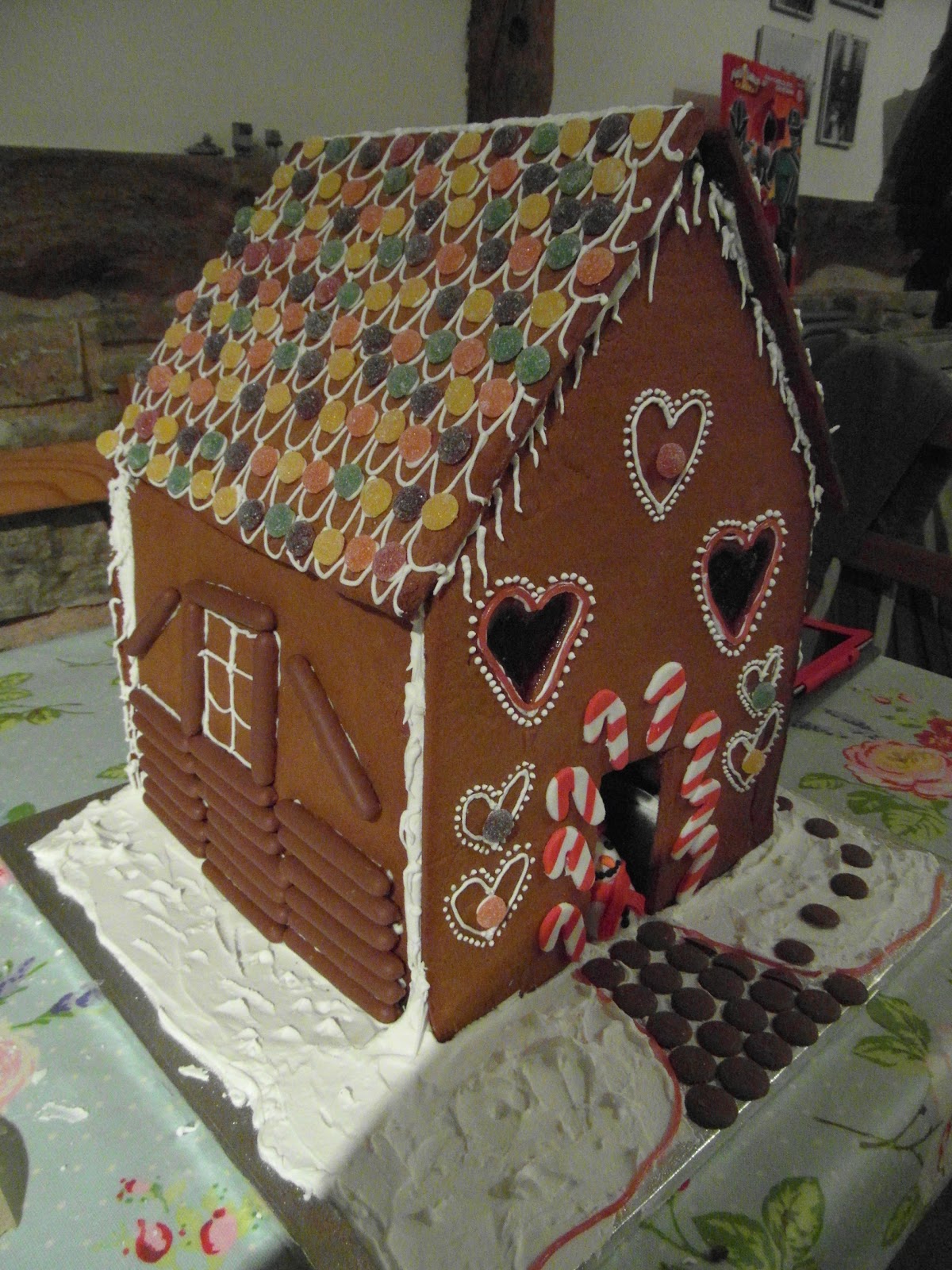 This weekend is the annual village Christmas Pantomine and party. This year young Master Vander-Cave has a part in the panto. He has been attending weekly rehearsals and is looking forward to playing the part of...... The magic carpet! He is also playing a market trader but that's not his main part you understand. Gemmy and her family are coming to stay for the weekend so they can also enjoy Master V-C's public acting debut! As mother of one of the actors I felt duty bound to produce something just as theatrical and impressive as my son will be on Saturday. The only festive option I could see which would fit the bill would be a gingerbread house! Having never made a gingerbread house before, I discussed my ideas with Mr V-C, who quickly jumped on board with this project and gave his technical drawing skills an outing to design the aforementioned house. From here on in I need you to remember that men think "bigger is better". Mr V-C decreed that this house needed to be big enough for all the children to have a piece and the size will be what makes it amazing. So, yesterday morning I found myself rolling out 34cm high front and back panels for the house, only one of which would only fit on my biggest baking tray at a time. Therefore I had to cook each piece on a separate baking sheet! The rolling, cutting and cooking took all morning and there were several moments when Mr V-C's name was mud! In fact, when one of the roof panels burnt, I found myself stamping my feet and growling in exasperation! Temper tantrums by 30 something women are not becoming, and I do not advocate this behaviour generally but I did feel better afterwards!

It took both myself and Mr V-C to stick the house together with copious amounts of royal icing and some flasks for wall supports! I had several "fridge and pray"(see Great British bake off for this reference) moments during this exercise and spent the next few hours anxiously watching the walls for signs of subsidence whilst I decorated the roof. The roof took 8 bags of jelly tots to decorate and once decorated, the tricky mission of getting the roof panels in place and the icing to set was all that was left to do. As architect of the house I felt it only fair that Mr V-C should hold the panels during the most delicate stage of the operation. bless him he had to hold the panels in place for a good 10 minutes before we were confident that the roof had stuck. The finished result is not as tidy as I would like but for a first attempt it's not bad and the size definitely counts as impressive!

Lets just hope it tastes as good as it looks!

Ginger bread house
This recipe was modified from the BBC good food website recipe. I must point out that the dough is quite wet and greasy and I initially thought I had got something wrong but stick with it and it will come out fine! for their template clicke here http://www.bbcgoodfood.com/recipes/4900/

Melt the butter, sugar and syrup in a pan.

Mix the flour, bicarbonate of soda and ground ginger into a large bowl, then stir in the butter mixture to make a stiff dough. If it won't quite come together, add a tiny splash of water.

Cut out your template. Put a sheet of baking paper on your work surface and roll about one quarter of the dough to the thickness of two £1 coins.

Cut out one of the sections, then slide the gingerbread, still on its baking paper, onto a baking sheet. Repeat with the remaining dough, re-rolling the trimmings, until you have two side walls, a front and back wall and two roof panels. Cut out windows in the front wall and place boiled sweets in the holes to make stained glass windows. They melt during the baking process and set as 'glass'. Any leftover dough can be cut into Christmas trees, if you like. 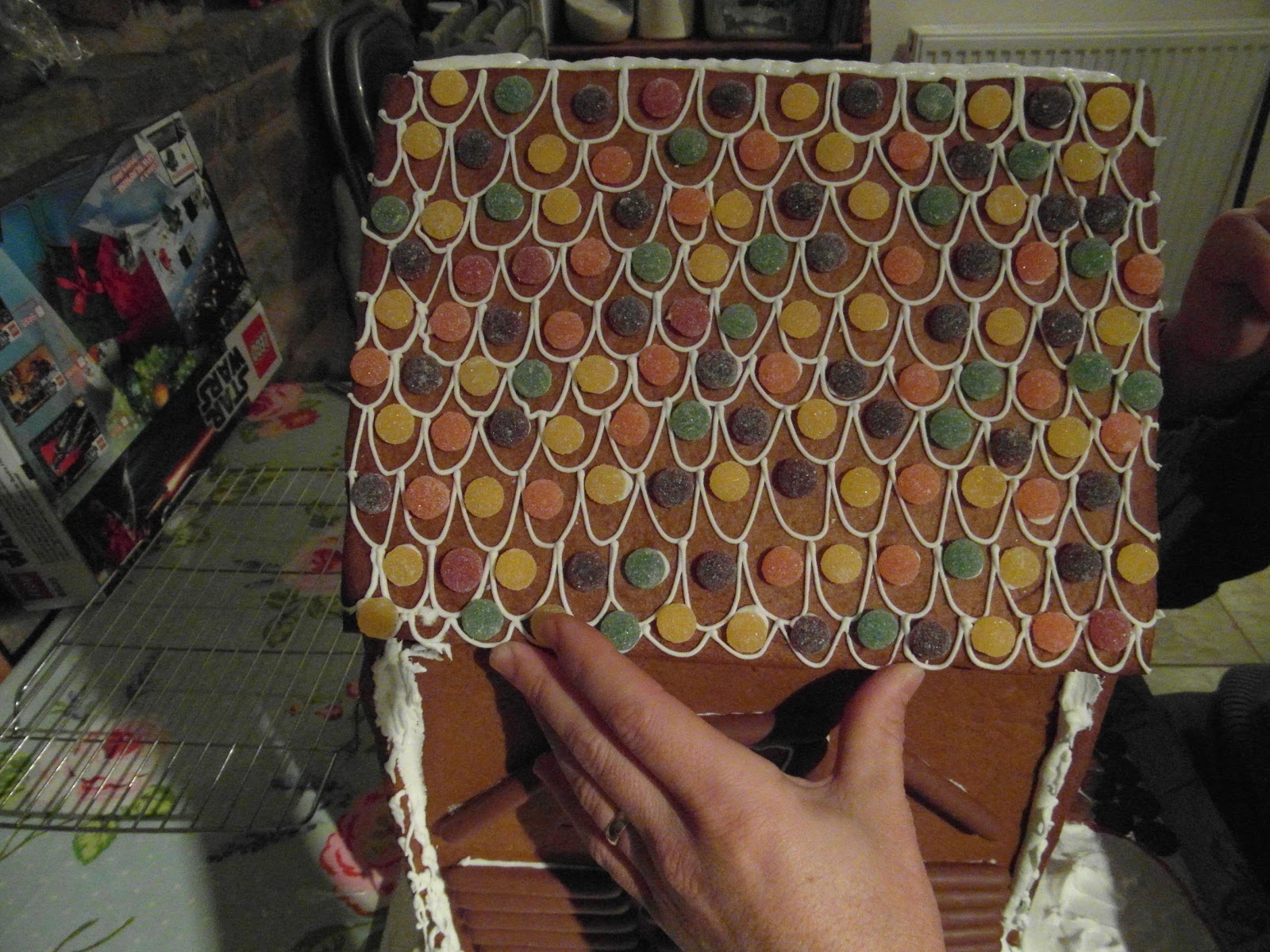 Using royal icing as 'glue', stick together the walls of your house. Use a bowl or 2 as supports for the walls. Leave to set for a few hours before adding your roof. When adding the roof you may need to hold the roof panels in place for a few minutes until no slippage occurs.  Remember to remove anything used as temporary wall supports from inside the house. Decorate in any way you fancy! 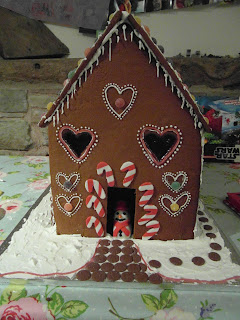 Update: When we got to the party with the house it was decided that it would be auctioned to raise money for a local charity rather than just let the children loose on it. The house raised £18 and the winning bidder (our very generous neighbour) then gave the house to the children to eat. Below is what it looked like after the children had had their fun with it! 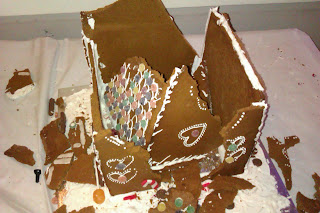 And Finally, I must mention the brilliant actors from last nights performance. It was the best production they have ever done. Our locals clearly enjoyed themselves as much as we the audience enjoyed it. Well Done ladies and gentlemen, boys and girls. I particularly enjoyed the flying carpet whizzing across the stage and Abanazar's ad-libs during the ring scene!﻿
﻿
Posted by Mrs Vander-Cave at 17:42 No comments: 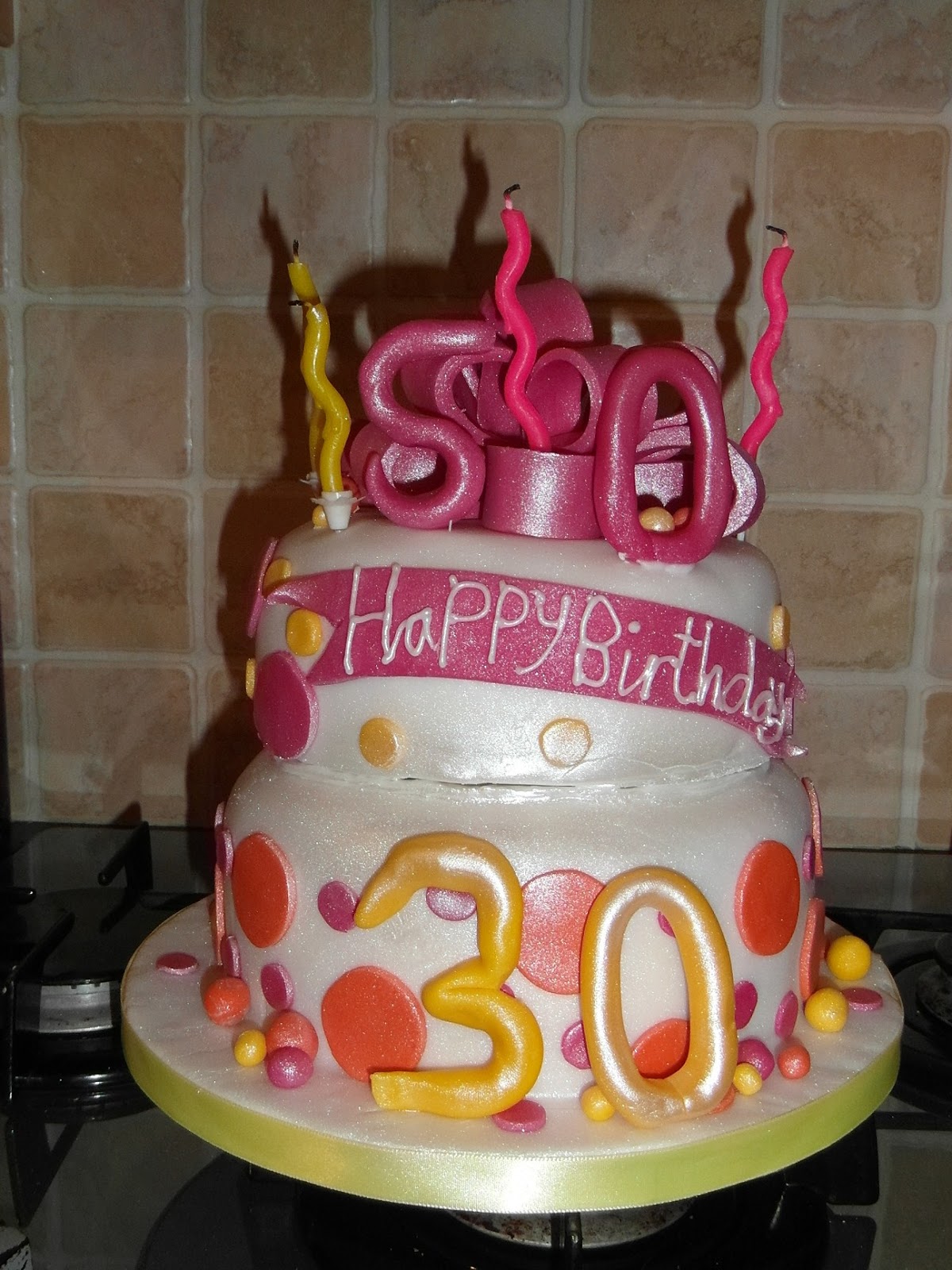 Recently we have had two milestone Birthdays in the extended Vander-Cave family. My darling Sister has hit the big 5-0 (but keep that under your hat!) and her beautiful daughter, my niece, celebrated her 30th. I nominated myself as Birthday cake baker for the joint celebrations that occurred last weekend, mainly so I could continue to practice my fondant icing and attempt a stacked cake for the first time.

For weeks now I been mentally planning this cake and found myself awake at 5.30am on the morning of my designated cake baking day! This time I chose a Madeira cake for my two tiers with a jam and butter cream filling. I have never made Madeira cake before as I prefer a Victoria sandwich sponge and having made the Madeira, I would only use it for fondant iced cakes as it is slightly firmer and dryer that a traditional Victoria sandwich. For this job the Madeira was perfect.


Having made my cakes, next came the nerve racking bit; icing and stacking! Actually, I couldn't stack it until we had travelled the 130 mile trip home to the city because I didn't have a box tall enough to transport it!   Having iced and decorated my two tiers and made the fondant numbers that I planned to add once the cake was stacked, I packed a bag of "tools" including my cake lifter, sugar paste glue, paint brush, pearl spray and royal icing. What I didn't take (and should have) was any extra fondant. Unfortunately, in transport, the "3" for the 30 broke and when I stacked the cakes I had left the dowels slightly too long so there was a gap between the tiers. I was able to get some yellow fondant from a local shop but it didn't have enough time to dry, which is why it looks a little weird. I tried to fill the gap between the cakes with some royal icing but this didn't work particularly well. So the lessons I learnt about stacking cakes are 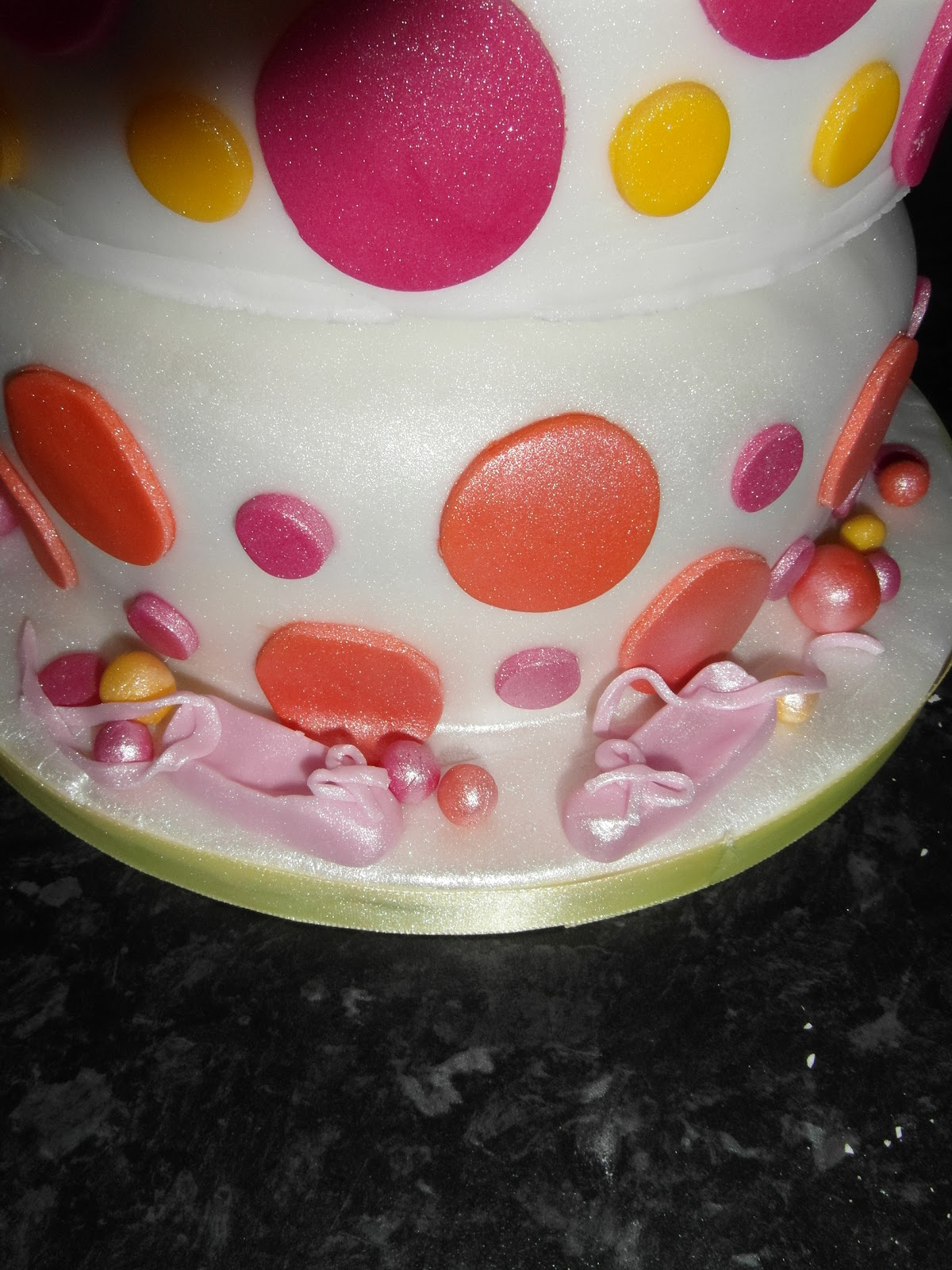 Overall this cake was a good first attempt and both my sister and my niece were thrilled by their cake, my niece particularly liked the ballet shoes hidden around the back of the cake which were a homage to her 6th birthday cake. This cake is the stuff of family legend being that the "ballet shoes" birthday cake looked more like ballet shoes for princess Fiona from Shrek than a little 6 year old. What makes it even more amusing is the fact that my niece has tiny feet and even at the ripe old age of 30 these ballet shoes would have been too big!

Pre-heat the oven to 180C/350F/Gas 4. Grease an 18cm/7in round cake tin, line the base with greaseproof paper and grease the paper.

Cream the butter and sugar together in a bowl until pale and fluffy.

Beat in the eggs, one at a time, beating the mixture well between each one and adding a tablespoon of the flour with the last egg to prevent the mixture curdling.

Sift the flour and gently fold in, with enough milk to give a mixture that falls slowly from the spoon.

Spoon the mixture into the prepared tin and lightly level the top. Bake on the middle shelf of the oven for 30-40 minutes, or until golden-brown on top and a skewer inserted into the centre comes out clean.

Remove from the oven and set aside to cool in the tin for 10 minutes, then turn it out on to a wire rack and leave to cool completely.

I use my Kenwood chef with paddle beater for the butter cream.
Beat the butter until very soft, it will be very pale and creamy looking.

Add the icing and slowly increase the speed on your mixer until all the icing sugar is incorporated and the mixture is soft and smooth.

Beat in the vanilla extract and milk until you have light and fluffy butter cream.

Use to sandwich your cakes or top cupcakes.
Decorate anyway to your heart desires!

Posted by Mrs Vander-Cave at 21:53 No comments: