As the year comes to a close I, like many, am feeling reflective and just a little bit guilty for not keeping up with my blog as much as I would have liked. 2013 has been a watershed year for me. I have managed to get a handle on the ME that struck me down in 2012 and I am learning to live a new life, very different from my pre-ME life, but very rewarding and challenging non the less. I have taken the plunge and started my cake making and decorating business and I hit and survived the big 4 0. (Someone pointed out to me recently that i need to update my bio on the blog as I'm not a 30 something anymore but I'm still a bit in denial. Caroline, I admit it!)
This is my year in a whistle stop tour: 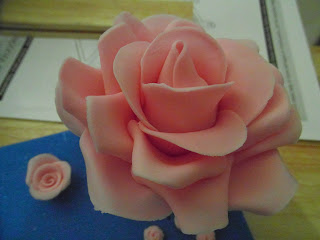 When I returned to work in January I didn't think I would manage anything apart from work and rest but very slowly (too slowly at times) I started to find the energy to make cakes and of course continue my new passion for cake decoration. With the wedding that started my passion for decorating coming ever closer my sugarpaste rose practicing became slightly frantic until I mastered the art with the help of some great tutorials. You can find my favourite one here sugar paste rose tutorial part 1. The sense of achievement I felt when I had made that final rose for the cutting cake was utterly amazing and concreted my desire to do more of this and hopefully build a business.

February
With the wedding cake finished and the confetti brushed away my mind turned to Back Of Beyond Baking cakes and cupcakes. Thanks to some great friends and family ordering cakes and spreading the word it didn't take long for the orders to start rolling in. My first paid cakes went out in February, the first of which was my 'beauty' girly cake for a 20th birthday. My nerves were in overdrive when I delivered that cake but the feed back was so wonderful I was hooked and with the photos of that cake I had my first 'non friend' order! 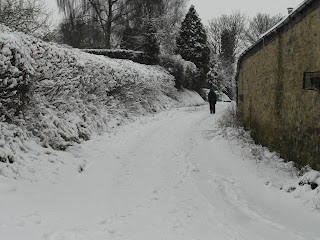 March Brought snow and ice to the Back of Beyond and my first cake-tastrophe. (I still don't know what went wrong with that cake). As the snow was falling and Master Vander-Cave's dreams of a  birthday weekend at Alton Towers was postponed, I was up at midnight finishing a second cake for a pony ride party after the first cake collapsed in the middle and I had to bake another cake. The pony ride didn't materialise either. They ended up having a sledging party!  We had a great weekend sledging and Master V-C did get his trip to Alton T,owers all be it  2 weeks late. 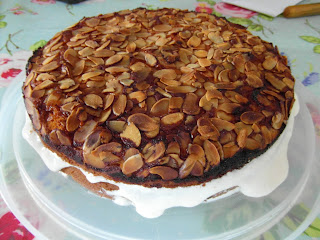 My first Clandestine Cake Club meet up occured in April. The theme of the meet was continental cakes and after much scouring of the internet I decided upon a bienestich cake (a bee sting cake) which is a honey and almond cake with a creme patisserie filling. Unfortunately my creme pat didn't set properly! I should know better and should have done a trial run, and by the time I got to the venue my cake had lost a fair bit of its filling and needed to be eaten with a spoon. All the other club members were very generous and made kind comments about my slightly unattractive offering. Some shared stories of their previous offerings that had had similar issues and most agreed for transportation one should consider a drier cake! The CCC is a fab idea and I urge anyone with a passion for cake to join up and find their local group. I had a great time trying lots of different cake and chatting to fellow baking enthusiasts. 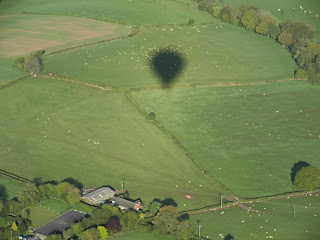 In may I finally hit the big 4-0 and I must say it was a lot less scary than I thought it would be. Possibly because I filled my birthday with a luxury stay at the Hotel Terravina, a fabulous boutique hotel in the New Forest (you can see pictures of it  here ). Dinner in their 'Michelin star worthy' restaurant, a lunch out with friends and a trip to Harry Potter studio tour. I had also hoped to get my ride in a hot air balloon but like Master V-C the weather thwarted us and it was 3 weeks later that I finally got my wish and had a beautiful early morning balloon flight over rural Herefordshire. I made my own Birthday cake as I wanted to try out the box of cigarillo chocolates I had bought. "My life is like a box of chocolate" cake was a sucess and everybody who came to my birthday lunch thoroughly enjoyed it. 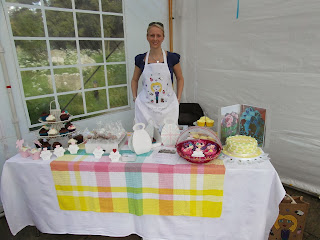 June
This month saw me having a stall at a local craft fair selling my cupcakes and cake pops. It was nervewracking to make so many cupcakes and then put them out on a stall and say come and buy me.(I still think no one will like my cakes!)  Thankfully, although it was a quiet event accourding to the other stall holders, I sold out of cupcakes and lots of people took a business card. I was on a serious high by the end of that day!

July
July bought the hotest week of the year along with my busiest week to date and some serious cake challenges. Whilst the country sweltered, the two Vander-Cave males were occupied with cricket and Andy Murray fought his way through to the wimbledon finals, I fought with wilting fondant and curdling buttercream to make one of the most special cakes of the year, my close friends 40th birthday cake and my first handbag cake. The cake turned out suprisingly well all things considered. On the day of Soph's birthday we gathered at a country house for afternoon tea and it was a truely memorable day, tears and laughter and a spontaneous rendition of "for she's a jolly good fellow" and much cheering when the news came through that Murray had done it. We finally had a british winner of Wimbledon. And to top it off Master V-C's cricket team won the county cup. A truely wonderful month. 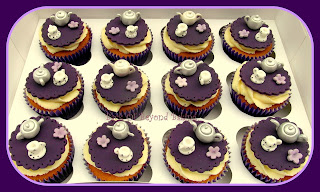 At last our summer hols to spain and a well earned break from cake. I missed eating cake almost as much as I missed making them and I did find myself checking the business email when free wifi allowed and even booking another craft fair. This one in the run up to Christmas. Almost as soon as we touched down in blighty I was back in the kitchen, this time creating my first birdcage wedding cake and 45 vintage tea party cupcakes with minature cups and saucers. The bride and groom were thrilled with their cake and another first ticked off for Back Of Beyond Baking.

September
As the schools went back and the weather started to get cooler my cake orders got quieter. This initially caused me to feel anxious but then I knuckled down to sorting out my accounts and a bit of me-time, including a proper day off hitting the shops, enjoying a relaxing coffee and a read of something other than a recipe book! This quiet spell didn't last long (a week I think!)  before I had to turn my mind to Christmas cakes! 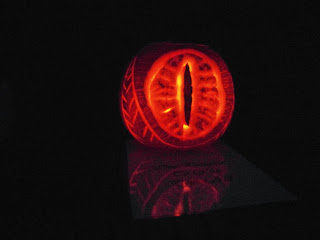 As any one who makes Christmas cakes and puddings knows you have to be prepared to get thinking about it sooner rather than later and this year this was never truer. I put out adverts via my Facebook page and the village noticeboard and eventually closed my book at 15 christmas cakes as well as various christmas puds and yule logs!  The cakes took me 4 days to make, 15kg of dried fruits  and 40 eggs, an hour to feed each time they needed feeding and they drank 2 litres of brandy between them! It was a mammoth task but well worth the happy customers when December 25th finally came around. The end of October brought annual village halloween pumpkin competition. Both Mr V-C and Master V-C entered pumpkins, while I was busy making halloween cupcakes for the village halloween baby who's now 3 years old. I'm pleased to announce that Mr V-C had a winning pumpkin with his amazing Sauron's eye.

November
As the nights drew in my energy levels dipped a bit but I managed to pace myself well and find the energy for all the tasks required and some time for more clandestine cake fun. This time the theme was british classics and as someone else nabbed the Victoria sandwich cake for their offering I produced my mum's classic the boiled fruit cake. Have a look here for this recipe for  boiled fruit cake.  The cake went down well and although the Victoria sandwich cake maker pulled out, we still had an excellent selection of cakey treats and some lovely company to share the cakes with. I am definitely looking forward to more CCC meet ups in 2014. Towards the end of the month master V-C and I went to Birmingham to Cake International. A veritable feast of cakes were on show, with cake competitions for every imaginable catergory, including best carved cake which boasted a life size Captain Jack Sparrow and a 4ft tall TARDIS, and best wedding cake which had some cakes that one couldn't even begin to imagine how they were created. Their beauty was quite breathtaking and master V-C took a gazillion photos of the various cakes.  In fact it was difficult to drag him away. 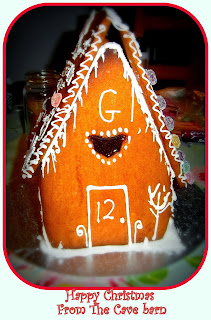 This month, as it should be, was all about Christmas. On the first day of the month I took my cakes and cupcakes to  a Handmade in Herefordshire Christmas craft fair. Again I was told it was a quiet event but I still sold 90% of my cupcakes and a few of the individual mini Christmas cakes. Thankfully an advert on my facebook page took care of the remaining cakes and puddings! I then spent much of the remaining month icing Christmas cakes and creating Christmas themed cupcakes. Whilst I was kept busy with this Master Vander-Cave was busy rehearsing for the village panto. His part had grown this year from magic carpet in Aladdin to Will Scarlet in Robin hood and the Babes in the woods. He had quite a few lines to learn which he did without needing much support and then remembered them all once onstage with around 100 people watching. His comic timing and delivery were spot on and again we felt very proud of our boy.
By the time Christmas arrived I was glad to see the back of the last Christmas cakes. The Vander-Cave cake was a very simply iced affair and to be honest it was lucky it got iced at all! Christmas this year was a quiet one with just the three of us in our barn but then followed up with a chaotic day with the wider family back in the big city. And now all there is left for me to say is Happy New Year and may 2014 bring all you wish for. x
Posted by Mrs Vander-Cave at 14:45 No comments: