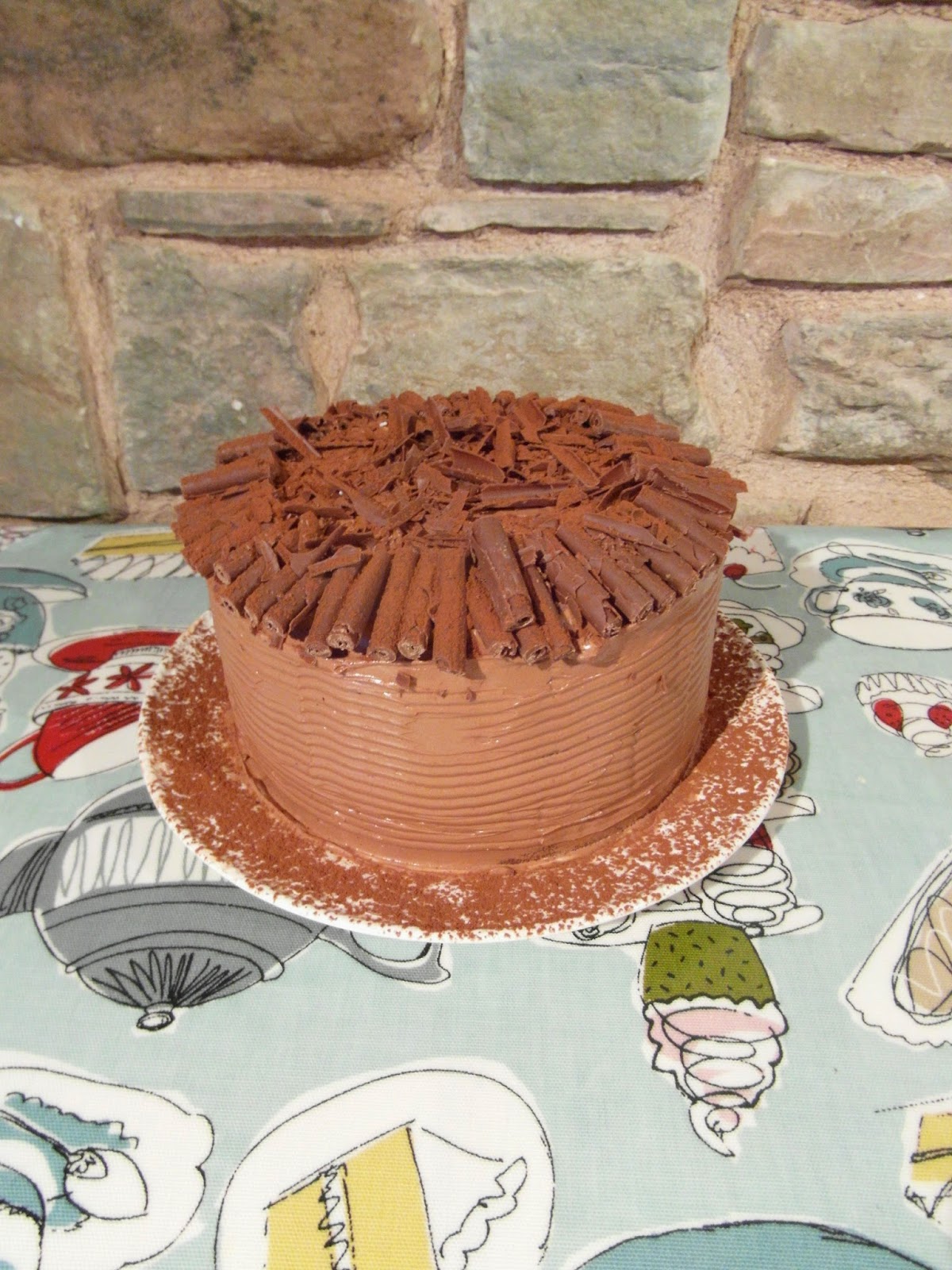 What a week! So many highs and a one real low this week in the Back Of Beyond. The week started fabulously with a delicious collection of cakes at a long overdue Clandestine Cake Club meet which I have been looking forward to for some time. The cake buisness has been pretty full on over the last month (hence the lack of blog posts *hanging head, looking sheepish) and I knew by the time I got to bake my cake for CCC I would be facing a week with no cake orders. Over the past year I have often been stressy if I had a week or two without order but being so busy I have actually been looking forward to a week off.

The theme for the CCC meet was the World Cup and World Cup nations. I decided my offering would be a Mississippi mud cake from the Hummingbird bakery Home sweet home book. I hadn't made this cake before but it looked fairly foolproof and everyone loves a chocolate cake. I did reduce the recipe by a third as the book recipe made a 3 layer 8inch sponge and the CCC rules say to bring a cake to serve 10-12 servings and the club in the back of beyond is not very big. My cake was still pretty sizeable and made more than 12 servings. Our meet up had 7 cakes with a couple of fondant decorated vanilla sponge cakes with a football theme, an Iranian pomegranate cake which was so moist, with cardamon and cinnamon flavours running through it, a Himmeltorte which really was a labour of love (you can find a recipe for it here), a mojito genoise sponge with rum and lemon flavours and a lemon and lime cake made with clotted cream. All of which were delicious and there was enough to bring a bit of each home for Master Vander-Cave to sample them too. I do love my CCC meets and with a new organiser I am hopeful for meeting slightly more often.

The other high point of my week was heading back to the big city to take part in Race for Life 10km. As long time readers will know I haven't been well over the past 2 years and I see taking part in this race is part of my recovery. Although I could have completed the race here in the back of beyond, I wanted to attend the race in the town where my close friend who lost her fight to cancer lived and where some of my nanny gang still live. After intially worrying I would be billy no mates (Mr V-C and Master V-C were at home because Master V-C was heading off on his school trip to France at the same time as the race) I ended up being well supported.  Two of the gang were there to see me off and be my water bottle holder and my niece Em and her son arrived to give me a hug at the the end. It was a very emotional race for me on so many levels and although I didn't meet my target time of under an hour I was thrilled to complete the race in 1hr 5minutes, a real sense of achievement completing this challenge whilst raising some much needed money for Cancer Research UK.

Unfortunately triumph gave way to terror on my way home to the back of beyond, I was involved in a car accident in Mr V-C's week old company car and because I was in shock and complained of neck pain I was put on a spinal board and taken by ambulance to the nearest hospital. Thankfully a few hours and some X-rays later I was given the all clear for a spinal breakage and diagnosed with whiplash and bruising and told to rest up for a few days. The car on the other hand is pretty banged up but at least they didn't cut the roof off which was discussed as a way of getting me out of the vehicle. I did get quite vocal when this was mooted, as I wasn't sure I wanted to face Mr V-C and tell him his long awaited car was now an open top!!!

This accident has given me a timely reminder that life really shouldn't be squandered. Every day should be celebrated (perhaps with a sliver of cake?) and we need to be kind to each other because you never know when our nearest and dearest may be taken from us.

Now who's going to make me some cake while I put my feet up as the Dr ordered!

If you want a smaller cake reduce all ingredients by a third and use 2 x 7inch cake tins.

For the decoration: 40g dark chocolate, shaved with a vegetable peeler

Preheat the oven to 170C. Line three 20cm loose-bottomed cake tins with baking parchment.
In a freestanding mixer with the paddle attachment, cream the butter and sugar together until light and fluffy.
Add the eggs one at a time, mixing well.
In a medium bowl, sift the flour, cocoa powder, bicarbonate of soda and salt.
Mix the buttermilk and vanilla extract in a jug.
Add the dry ingredients to the creamed butter and sugar in three additions, alternating with the buttermilk mixture.
Mix well on a medium speed. Slowly add the boiling water, mixing until combined.
Divide the batter evenly among the three prepared cake tins.
Bake for 35-45min. Remove from the tins and let cool before frosting.

Whisk the icing sugar, cocoa powder and butter together on a low speed until there are no large lumps.
Add a little cream cheese to loosen the mixture and beat until smooth, then add the remainder and mix on a slow speed.
Turn the speed to high and beat the frosting until light and fluffy.

Once the sponge layers feel cool, assemble the cake. Place the first layer on a plate and top with 3-4tbsp of frosting. Smooth out the frosting using a palette knife. Sandwich the second layer on top, then add more frosting, followed by the third cake layer. Next, frost the sides and top.
Finally decorate the top of the cake with chocolate shavings and cocoa powder.

Posted by Mrs Vander-Cave at 19:40 No comments: